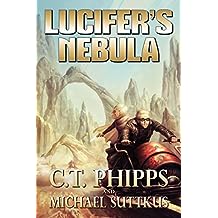 Lucifer’s Nebula, by C. T. Phipps and Michael Suttkus is the second novel in the adventures of Cassius Mass, a devilishly handsome former prince of a cruel planet that no longer exists. This is like Star Wars if it were written in a darker and more cruel (and arguably fun) universe.
Lucifer’s Nebula is a sequel to the first book, Lucifer’s Star, in which we learned that the universe has experienced governmental turmoil, civilizations have been ravaged, and an ancient set of beings known as the Elder Races have left their mark on the current civilization. This book picks up where the first left off in a way that doesn’t make you feel like you’ve missed a step between the books.
We find our reluctant hero, Cassius Mass, as the hesitant Captain of the Melampus, the ship that he had been flying on during the previous book. His crew is filled with variously colorful characters, including his two lovers, the aggressive First Mate, Clarice, and the ship’s medical officer, Isla. Isla is also a bioroid, which is like a fleshy C-3PO who’s artificial intelligence is so advanced that it’s considered (by some) to be a sentient being. Many of the bioroid’s of this universe are enslaved, as most people see them less like people and more like machines. Isla’s struggle, in this book and the last, reminds me of Pris from the original Blade Runner. She was made for one purpose (in Isla’s case, sex), but rebels against her users to follow her true calling. At this point, that mostly consists of being a medical officer and hanging out with Cassius’s pirate crew.
Most of the cast of Lucifer’s Nebula (and the whole series, really) is incredibly broken or has experienced some sort of trauma. One of my favorite characters, William, had to deal with his entire world being ravaged and destroyed by one of the warring governments. Major Terra (introduced in this book) is a brainwashed soldier from that same world as William. She was kidnapped by her conquerors and brainwashed to be their loyal assassin. Everyone’s broken. The Melampus wouldn’t be remiss in renaming itself “The Isle of Misfit Toys.”
This broken aesthetic doesn’t end with just the crew, as their Captain is the most broken of them all. Inside his head he relives and can never escape the memories of all of the people that he’s killed or led into a battle that’s gotten them killed. One of those ghosts is his dead wife, who seems to have lost much of her humanity in her transition from living flesh to digital ghost. He’s wracked with guilt and anger over who he was and what he’s lost and he desperately wishes to atone for the life he’s lived.
In book one, this led us into the great character arcs that Phipps and Suttkus are famous for. Phipps always manages to introduce you to an utterly broken person and show us their path toward healing. When book 1 ended, we had hope for Cassius.
Then book 2 started, and we were saddled with an uncomfortable reality. While a lot of what was broken in these characters was healed, life doesn’t let you forget about the parts that you haven’t fixed yet. Cassius is still addicted to his alcohol and self-destructive tendencies, and the character journeys in this book help us to see the more human side of addiction, abuse, and violence on both a global and a personal scale.
There’s politics, huge twists, and adventure galore, but the big win with any book that has Phipps’s name on it is the character development (and the action. Lots of great action.).
This book is an easy 5 out of 5 stars. I look forward to the next one!

The first thing that everyone, without exception, does when you tell them that you’re expecting a child is offer advice. Sometimes they’ll disguise it as a story from their times as a parent or caregiver and other times they pretend they heard you ask them just so they can tell you. It’s a little annoying, but it’s harmless and, to be completely honest, I’m certain I’ll do it to someone else when the time comes (or I already have!).

For writers, it’s no different. While Ren and I received, and continue to receive, everyone’s general opinions about fussiness, diapers, and corporal punishment, my writer friends have only ever said one thing:

Now, I’ll admit that my first several weeks with my beautiful bundle of joy was exhausting. She’s perfect in every way, but she is still a baby, and baby’s in those first few weeks can make every day feel like you’re walking through mud. Exhaustion is real, my friends.

While I still haven’t written anywhere near as much as I would have hoped to have written by this point in 2018, I will proudly admit that it has nothing to do with my daughter. My procrastination in my writing has been entirely the same as it was before she was born.

“Hey there, Mr. Novel-in-Progress! How are yo- Oh, look a (Netflix show, phone game, Youtube video, cat that needs petting, or butt that needs scratching)!”

Writing is one of my favorite things to do, but my biggest problem in writing has always been me. Once I sit down and make myself start typing, it flows easily and I can get a lot of words down. It’s that initial “making myself sit down and start typing” that’s the hardest part.

And that has nothing to do with my daughter.

To that point, there has been adaptation. I don’t expect to sit down and get four straight hours of writing in the middle of a Saturday. Instead, I adapt. I write when she naps, or I write when she’s gone down for the night. In contrast to the myth, having a child doesn’t require 100% of your day. She does require 100% of your love and attention when she’s awake, but if she’s napping next to you looking all adorable, there’s no reason you can’t pop open your laptop and let her be your writing muse!

I’m only speaking from the position of a parent who’s only child is under 6 months old. It’s likely that as she ages and and her needs change I will find less and less time to write.

The good news is that I don’t believe any of that.

I believe that as her needs change I’ll adapt my writing schedule and style. I’ll still procrastinate but I’ll also evolve as my daughter grows.

That being said, I totally wrote two more chapters in the next Andrew Doran novel last week. You’re welcome.

I love my Peanut. Her and Ren are the best Muses a guy could ask for!

To be entirely honest, when I first picked up my audio copy of Meddling Kids, by Edgar Cantero, I had no idea that I would be writing a review for Shoggoth.net. As a matter of fact, I only picked it up because I remembered reading somewhere that it’s an adult parody of Scooby Doo. To that point, it absolutely is a 100% homage to Scooby Doo, but it is also an homage to Lovecraft, the mythos, and the other players in the mythos.

The story takes place in 1990, 13 years after the Blyton Summer Detective Club (BSDC), aka the Scooby Doo gang, solved their last case. It starts with their last masked villain getting out on parole and being confronted by the slightly more aggressive version of their Daphne. In this, she goes by the name of Andy and she’s only the Daphne character because all of the others were already taken. In this opening scene, it becomes quickly apparent to Mythos fans that this is going to be a Lovecraftian tale.
From there, Andy collects Carrie (Velma), and Nate (Shaggy), and since we’re 13 years past the BSDC days, Shawn’s (Scooby’s) grandson, Tim. Our Fred is the first obvious casualty. He died a few years before this reunion after a stint as an actor ended in a drug overdose. This is how they introduce that all of their lives aren’t what they had expected and they are sure that the real mystery behind their last case wasn’t a masked villain, but was instead an actual lake monster that the news covered up. Ever since they were scared by that real monster, their lives have been hell. Shaggy is in an asylum in Arkham, Velma got her biology degree but instead waits tables at a bar, and Daphne is a former Air Force soldier who escaped from prison.
Needless to say, their lives are shit and they know that they need to confront whatever it was that they ran away from if they ever want to get their lives back on track.
The book is filled with some great call backs to the original Scooby Doo (there’s a Zoinks River) as well as some references to Nancy Drew, the Hardy Boys, and other childhood mystery stories. As a Mythos tale, Edgar Cantero doesn’t shy from the deep end of the mythos and plays as fully in that as he does the Scooby Doo stuff.
The negatives about this story resolve entirely around the writing style, which switches between standard novel-style and screenplay without any warning. It’s jarring and sometimes confusing, but as an audio tale it was generally alright to follow. It took me about three or four times before I stopped paying attention to it, but you do notice it. The other thing is a lot of the made up words and overly cartoonish descriptors. The made up words are simple to understand the meaning of, but those and the odd descriptions pull you from the story as you stop to rewind in your mind what you just heard/read and decipher it again in the context of the scene.
Outside of that, I thought the book genuinely enjoyable and had a great time reliving the good ole days of Scooby and the gang (and yes, Fred/Pete is in it…in a way). I also loved an interesting twist at the very end involving the newest Scooby of the gang, Tim.
Another thing: every now and then Tim does speak, just like Scooby Doo does, but this is explained away in a very clever way as a part of Nate/Shaggy’s hallucinations as a generally insane guy. It’s really well done and still gives us the Scooby scenes without breaking the reality that the story tries to weave.
4 out of 5 stars. Great book.
Loading Comments...
Comment
×