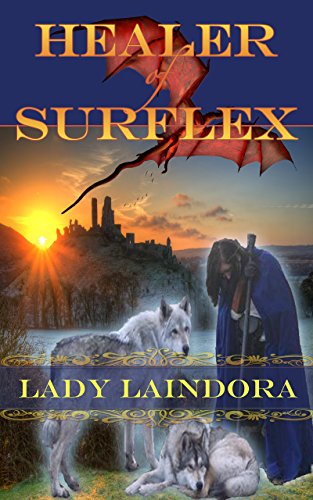 While Healer of Surflex isn’t my usual read, the pleasurable voice of Kelly Montijo Fink made the audio a fun time. Healer of Surflex is hard fantasy, with a story rooted in a world of magic and warring factions of good and evil. Most of the populace isn’t aware of the battle for their very souls, but it’s happening.
Having not read a lot of fantasy, I have read some, and what makes Lady Laindora’s book unique is that I’ve never seen a fantasy book that incorporates Christian beliefs into a fantasy realm. Doing so makes this more like an Arthurian legend, minus Arthur.
The book follows Kerlia as she’s selected, birthed, and trained by an angel and the warriors for good to be a healer in the upcoming battle with this book’s version of Satan, Kernel. Kernel has control over a large portion of the Kingdom of Surflex, and the book is filled with people being possessed or warped and twisted by their beliefs and support of Kernel. Honestly, in the first chunk of the book, the way that some of these people get twisted and filled with such dark evil makes it look like a contagion of belief, and solidifies how Kernel must have taken hold.
Lady Laindora’s strengths are in her ability to show and not tell. The protagonist, Kerlia, is mute and a lot of the book is explaining how she interprets the world and how she communicates without dialogue (and sometimes with, when she is part of the fairy realm). There are character descriptions that become part of the story’s narrative, and locations that are described the same way. She does a great job of describing things without you realizing that she’s describing them.
Healer of Surflex, and a lot of it’s aspects, remind me much of The Sword of Truth series, by Terry Brooks. The fairies and pixies that train her even reminding me of Zed the old wizard. They are funny but with purpose. At the same time, the style of the fight against evil gave me a feeling of Eragon with less dragons. Finally, there’s angels, God as we know him, and others aspects of this book that have a strong Christianity bend.
This is epic/battle fantasy with a theme, and it is done very well.
5 out of 5 stars.