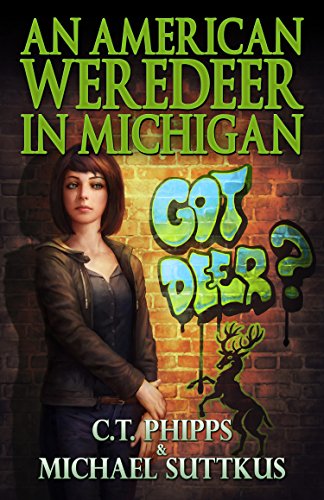 An American Weredeer in Michigan is the newest urban fantasy novel from C.T. Phipps and Michael Suttkus. The book takes place a year after the events of the first book, I was a Teenage Weredeer, and follows the same protagonist, Jane Doe. The entire series takes place in a world that has gone through the “Reveal” a time in which supernatural elements of the world are known to everyone and the world is still reacting to that information. Michigan is, more or less, a safe place to be, but a lot of people didn’t react well to the revelation and a new type of racism bursts forth.
So, when the new Shaman of Bright Falls, Jane, discovers a mass grave of discarded babies she already had a lot on her plate. Someone has been discarding newborns for the last hundred or so years, and it’s an atrocity that can’t go unpunished. Teaming up with her crew from the last book, Jane is on a quest to stop the murder of innocent lives…
Until a few more things come up. First, there’s a cult leader/wizard who wants to find the person or being responsible for the massacre and harness them for his own purposes. Also, money is an issue for the young and inexperienced Jane, and she’s struggling to make ends meet when the current leader of the werewolves wants to buy out her family business. Jane is, of course, reluctant to sell.
Oh, and her boyfriend’s brother is super into her. Her day is going to be a busy one.
Jane is a snarky protagonist in the vein of Harry Dresden and I love her for it.
I like ( a lot) how Phipps makes you feel the tension between Alex, Jane, and Lucien. The relationship, or confusion considering it, between herself and Lucien, and herself and Alex, is something that Phipps and Suttkus build up really well. Robyn, a new character introduced in this story, I like specifically because of her “Watson-esque” role she’s taken over for Jane. She becomes our outsider that helps us understand things while playing a pivotal role to the story, and I love that. She also feels like she came from Straight out of Fangton (another book that takes place in this universe, but not in this series), in her personality, which really helps tie the two series together in a thematic way.
I can’t recommend the Weredeer series by Phipps and Suttkus more. We have books that we read for fun and enjoyment, and we have books that we read as guilty pleasures. This is one of my guilty pleasures, falling into the snarky hero/urban fantasy genre that I always go back to.
5 out of 5, will grab up the next one as soon as it is out.