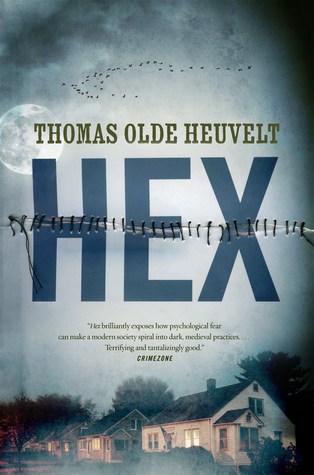 Writing horror isn’t easy. There are a lot of pitfalls that an author can fall into revolving around whether something turns too gory, too real, too fake, too hopeless, too unbelievable, or too disconnected from it’s audience. A lot of horror starts out well, but when it comes to the middle of the second act, it falls apart, a victim of it’s own narrative as the author tries and fails to ramp up the tension in new and exciting ways while still keeping our interest in these characters that we’re pretty sure are all going to die anyway.
It isn’t easy.
I point this out because I think that Hex by Thomas Olde Heuvelt is possibly one of the best examples that I have ever seen of how to take a few classic horror tropes and write them as new and exciting plot devices without being too heavy-handed.
Hex follows a town in modern America that has a witch problem. A long time ago, a witch came into existence and there are a few theories as to how she did. Part of that witch problem was that when she spoke, people would go crazy and either die right on the spot or would kill themselves in a rather gruesome manner. That witch tormented the town for years until, one day, her lips were sewn shut. Fast-forward to today and the witch is still around, and the town more or less ignores her. She’ll appear and hover over someone’s bed and the couple will do their best to pretend she doesn’t exist. When she decides to hang out in another family’s living room, someone puts a doily over her head. The only worries that the town actually has is just getting close enough to hear her whisper out of the corner of her mouth. Other than that, it’s just a matter of tracking her position with the Hex app a bunch of the kids made. Oh, and you can’t leave the town if you buy a home there. Leave for a vacation and if you’re away for more than a few days you won’t even know why you killed yourself.
That is, until the town starts to see things happening that don’t make sense. The family pet disappearing, people dying, and the government (that’s well aware of the witch problem) choosing to ignore the situation. This book takes what could have been a mediocre tale of a witch in a town and turns it into a book about Mob-mentality. The town has issues, and it’s obvious that they are the witch’s fault…right?
As things begin to escalate I found myself clamoring for more of the story of the main family, but still wanting details regarding the rest of the town. Rational and thinking adults began planning ways to appease a witch that are far from rational or well-thought out ideas. The horror escalates with every decision that the townspeople make, and less and less that horror is related to the witch herself and more to the mob-mentality that arises when people are too ready to blame a supernatural occurrence instead of hunting for the truth.
Hex was a book that I started reading based on a recommendation from my wife when I said that I wanted a good horror novel. It did not disappoint. I was hooked from beginning to end, and never once did the idea of the witch seem hokey or poorly written. Every character provided valuable insight into the pulse of the town, and I found myself having a hard time putting this book down.
5 out of 5.
–MD–