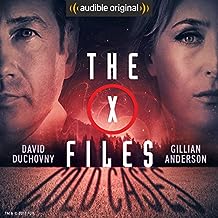 Back in 2008, I moved to Iowa from upstate New York (read that as “Farther upstate than what you’re thinking”). I’m a social butterfly, and I made a ton of friends in my new home very quickly, but that didn’t stop me from having evenings alone. On one of those particular evenings, I made a serious decision to do something silly: I was going to rent all of the sci-fi shows that I had never gotten a chance to see before then and give them a watch (to be fair, I also included every b-rated sci-fi movie as well. For that reason, I’ve seen both Time Runner and The Guyver. For both of those, I thank you Mark Hamill).
This is how I became a fan of The X-Files, staring David Duchovny and Gillian Anderson (and a million other stars who would later go on to guest star or star in their own sci-fi shows). I went on every single mission with them and grew to love Mulder’s silly moments and Scully’s skepticism.
And, after binge-watching all nine seasons, keeping magnets at the ready, and learning to fear the year 2012, I faced the inevitable truth that so many others had already learned to cope with.
The X-files was over.
It sucked, and I tried finding more of the snarky Fox wit through the comic books, but it wasn’t the same. The movies came and went, trying to fill the gaps for some of us, but alas, they were a drop of water in a desert. There and gone far too quickly to quench any real thirst. I had to face a cold and hard fact: There were never going to be any more of The X-files.
Life happened and years went by and I was sitting at my computer and writing when my wife blurted out, “They’re bringing back X-files.”
Wait…what?
Not a reboot, and not another movie, but a new season picking up with most of the original cast and some great sounding new cast.
Then the season came, with mixed reviews, but I loved it. The mixed reviews had me worried, though. Would they keep it going?
Yes, it turns out. They are working on a 11th season as we speak.
Absolutely wonderful, but what about the time in between. Do I really have in the vast oceans of time between each of these seasons?
As it turns out, no, my friend, we no longer have to wait idly by. That’s where Audible’s new series, The X-files: Cold Cases, steps in.
Cold Cases is a full cast dramatization, bringing back all of your favorite characters and filling the gap between the end of the first nine seasons and the beginning of the 10th season. It’s cleverly done, and brings to life the characters that have earned so much of our respect. The only negative to any of this was that the writing of the show had to be changed to fit the new format. Instead of seeing something and then getting a snarky Mulder comment or a dry Scully remark, we instead get told that something is happening and then receive the comment.
For example (totally made up and not in the books, but illustrating my point): “Mulder, why are you holding that gun at an odd angle? And why is it covered in paint?” “Scully, lower your eyebrow before it floats away. I’m holding this gun because it’s evidence, and it’s painted this very interesting shade of blue because it’s covered in alien fecal matter.”
See, very descriptive, reminding you that it’s a radio show. I think I might have preferred narration instead, but I honestly don’t know because it’s not an option. This isn’t a complaint, so much as the only thing that made it different than the show we love.
Other than that, you get all of the great sci-fi tropes and monster of the week things that X-files is famous for, as well as some new sci-fi tropes that I don’t think X-files has ever dealt with in the past. You get Smoking Man, Skinner, Reyes, Doggit, and a few more surprises that I won’t spoil for you.
Oh boy, you’re in for a surprise.
I give this a 5 out of 5. I loved it, and I want more Audible Original full dramatizations. I’m moving on to the Alien ones next, and the sequel to Cold Cases will be out in October!
Can’t wait!
–MD–