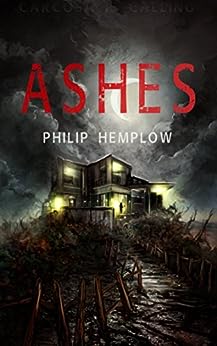 Philip Hemplow does just that with Ashes.

Ashes is a book about Patricia, an architect who is renovating an older home while trying to deal with a son locked away in a Russian prison. Brokedown Palace (the 1999 movie with Bill Pullman) is a great parallel to this story. Patricia’s son is locked away in a Russian prison for murder, but Patricia is stuck in the UK having to deal with corrupt lawyers and judges over the phone. They keep promising her that they can move his case forward if she could send more and more money.

The money has had its toll on Patricia, though.

Along with the stress of raising hundreds of thousands of dollars with no results, Patricia’s unwavering faith in her son’s innocence has cost her her marriage.

This is a short read, but it covered so much ground. As a reader, I found myself pulled through sympathy with Patricia as well as riding the waves with her as the two worlds, the one from the past and the one that keeps trying to convince her that her son is a murderer, inevitably collide.

Ashes is a book about how hope can be a horror just as much as blood, gore, suspense, and thrills are. I can’t recommend this book more.